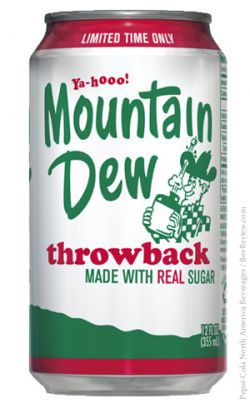 The retro Mountain Dew can

It makes some sense.  How do you appeal the the 75+ million baby boomers?  You help them take a trip down memory lane by giving your product a retro make-over.

I saw this Mountain Dew can on the shelf a month ago and immediately noticed how blatant they were in their efforts.  They’re calling it a throwback and making no apologies.

An added bonus — teens think retro is cool too.  With one packaging shift, this trend has captured the two buying groups with the most disposable income.  Teens and boomers.  Pretty smart.

And it’s not just a gimmick.  It’s a smart sales strategy. Pepsico is reporting that after a few months, the retro can have added one share point to sales, which equates to about $220 million in annual sales.  (They’ve also released a retro Pepsi can but my Coke preference precludes me from putting the other cola’s picture on my blog!)

It’s not just food products who are jumping on this retro bandwagon.  Nike launched the Air Jordan retro sneakers in February, Disney put huge dollars behind their Tron sequel and look at how many VW beetles you see on the road.

Last month, we had a lively conversation about what sells better — pointing to the past or the future.  How do you think the idea of retro fits into that mixture?

29 comments on “Is retro marketing the way to sell?”