Let's face it, we're a lazy people.  The idea of actually getting up to change the TV channels or hand crank open a car window is almost offensive to us.

We are used to our conveniences.  And we don't expend a significant amount of effort without getting something of note in return.  And yet, we seem to forget this human truth when concocting some of our marketing efforts.

As you are crafting a new campaign or gimmick that you hope will go viral — always ask yourself, is the juice worth the squeeze for my audience. 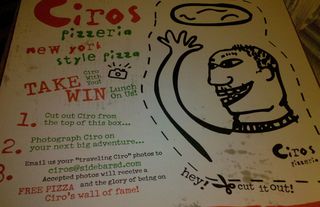 Let me give you an example.  These photos are the pizza box top from a place called Ciro's.  It's a fun idea and an eye-catching, almost handwritten design.  Here's what they want their customers to do:

For a poor college student, this is probably just the thing to do on a Friday night.  Especially after a couple beers.  God only knows where Ciro has appeared.

But for a busy mom or harried business guy ordering pizza from his hotel room, probably not going to happen.  A free pizza just isn't worth the hassle.

Whether you want your customers to fill out a survey, prospects to play a scavenger hunt, or want to try some variation of the drive them to a website, 800 number or bounce back card — always remember that you need to make the reward worthy of the effort.

And not everyone will judge that through the same lens.  So decide who is most important to you and design the reward for them.  Hopefully Ciros wanted to capture the college crowd.

What do you think…do most marketers ask themselves this question before launching a new initiative?

8 comments on “Is the juice worth their squeeze”