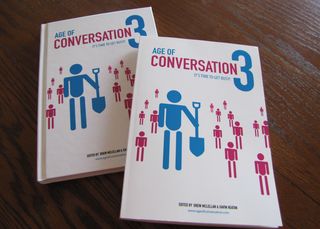 Three years ago, Gavin Heaton and I launched a little experiment that has evolved into a worldwide project of epic proportions!

We wanted to try crowdsourcing a book about social media, written by the marketing professionals that were establishing themselves online with blogs, Facebook, Twitter and all the other social media tools.  On a lark, without a great deal of forethought — we put out a call for authors.  Within a week, over 100 marketing pros responded and we were off to the races.

Now….as we launch our third book, appropriately called Age of Conversation III, I am struck by the scope of the undertaking.’

The first two books had 107 and 237 authors respectively and raised over $20,000 for children’s charities.  11 countries were represented and the media coverage was literally worldwide.

Both of the first two books were very much reflections of the time.  Most people were just beginning to dip their toes in so there were some fantastic chapters on the philosophy and spirit of social media.  Many were making the case for social media’s relevance in various sectors and circumstances.

That’s where this third book is really a departure.  The subtitle of this edition is “it’s time to get busy” and we really challenged the authors to step away from the theoretical and dig into the practical.  And boy, did they!  There are excellent case studies, some very candid “this bombed” examples and a much more pragmatic, from the trenches view of social media.

I think you’re going to be blown away by the content and all of the ideas, lessons and takeaways you get from the book.  The authors were honest, generous and insightful.

And of course….100% of the proceeds of this book will also be donated to charity, so you are helping yourself while helping the world’s children.

By clicking on one of the links below, you can buy it in a hardback, paperback or Kindle edition.  The ebook (for the iPad) version will be done shortly.

A project of this nature is expansive in scope.  I couldn’t (and wouldn’t) do it without my cohort and friend Gavin Heaton.  I love his generous heart and inquisitive mind.  He’s one in a million.

This year, a publisher stepped up (We’d self published on lulu.com for the first two) and proved to be invaluable in about a million ways.  Many thanks to Channel V Publishing and Gretel and Kate!

And of course…. the authors.  Without them, it would be a thin and vapid book indeed.  We’re very grateful that they’re willing to be a part of this project and to share their bumps, bruises, learning and wit.

Here’s a handy dandy chart of the authors.  Each link will take you to their blog or website.

4 comments on “Age of Conversation III — hot off the press!”