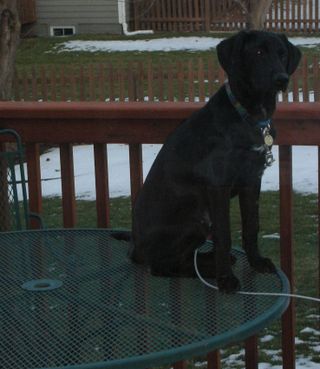 You may remember that there was an addition to the McLellan family this fall — Maggie the mostly lab (no idea what she's mixed with.) And yes…that's her sitting on the deck table.  And yes, I did tell her to get down.  Now you see the problem.

I took her to puppy school.  Pretty sure we only passed because the instructor did not want us back.  As she was standing on her hind legs, paws on the kitchen counter… eating what was supposed to be dinner (ours, not hers) and I am shouting at her (without her even blinking of course) I realized I needed more help.

So I found a dog whisperer.  She doesn't call herself that…but that's who she is.  She came by yesterday for our first "in home" training appointment and it was amazing.  Truly amazing.

Within 20 minutes, she had Maggie calm, sitting and laying down without giving her a verbal command.  While she trained the dog….she was really training me.

What she didn't realize is that she's also a marketing whisperer.  Here were her key lessons for yesterday.

Dogs (potential customers) aren't going to pay any more attention to you if you shout.  If you're not speaking their language, it doesn't matter how loud you are.  Shouting just scares or irritates them.

Dogs (potential customers) need consistent behavior.  It's what reassures them and makes them comfortable.  When you behave erratically or there's lots of inconsistency — it scares them.  They don't know what to expect or believe.

Dogs (potential customers) have very short attention spans.  Better to train/talk to them in lots of 2 minute increments, rather than a single hour-long session.

There you have it….words of wisdom from our very own marketing whisperer.  Which of those training rules are you breaking?  Have you learned a tough lesson by breaking one of them?